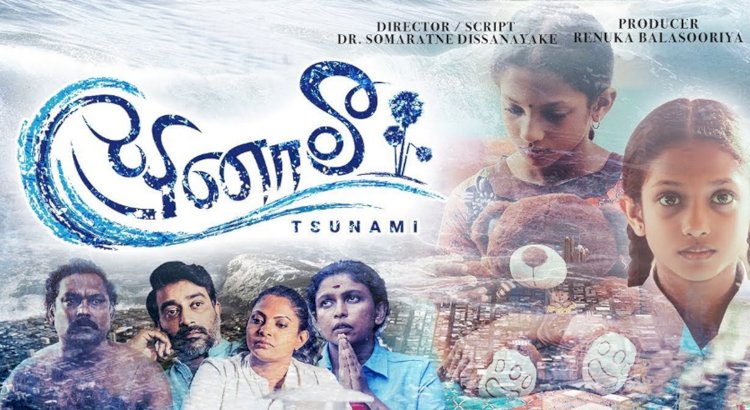 In 2004 tsunami, a two and half year old baby girl swept away with the floodwater. Selvam and Kalyani, the parents of the baby never believed that their daughter was dead as they did not find the dead body of the child despite the frantic search. After about 10 years later they see a newspaper article about a strange 12 year old Sinhalese girl who can understand Tamil and remember some incidents of her previous birth. With the photographs in the paper, the Tamil couple notices a birthmark in the face of the girl and suspects this girl as their lost child and claims her back. But the Sinhalese parents refuse and the girl is confused.

Tsunami is a 2020 Sri Lankan Sinhala disaster drama film directed by Somaratne Dissanayake and produced by Renuka Balasooriya for Cine Films Lanka. It stars Niranjani Shanmugaraja and Darshan Dharmaraj in lead roles along with Himali Sayurangi and Bimal Jayakody.

Somarathna Dissanayaka  obtained the first degree in medical radiology from London University, and later professionalized his hidden talents by obtaining a master’s degree in film directing from Sydney University.

Later he has given up the citizenship and the highly lucrative medical profession in Australia and returned to motherland Sri Lanka in view of making films.

All of his films are successful both commercially as well as artistically. While holding the box office record in the history of Sri Lankan cinema, he is also the winner of “the most number of international awards for cinema” in the country.

International awards for the film “Tsunami”

Special award of the jury for directing – (Dr. Somaratne Dissanayake)

( Final round has been paused due to pandemic)

Sri Lanka’s economy is among the worst affected by the...

Cyclonic storm ‘BUREVI’ moving away from Sri Lanka without...

Australia takes the first T2OI against Sri Lanka at the...