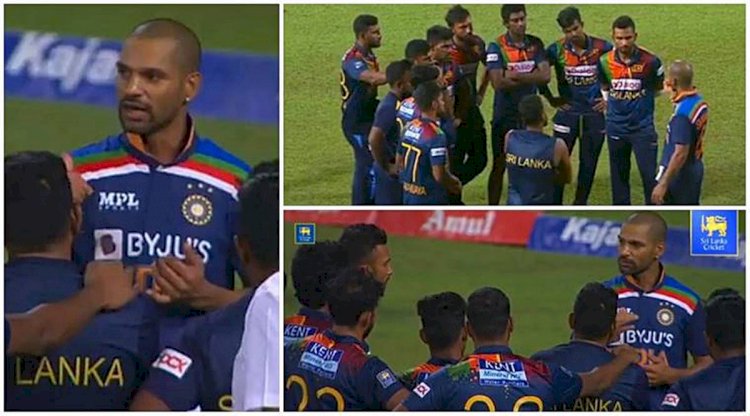 Sri Lanka spinners led by leg-spinner Wanindu Hasaranga rattled a depleted Indian batting to engineer a 2-1 series victory with a seven-wicket win in the third T20 International on Thursday.

Batting first, India playing with at least two batsmen short were restricted to their third-lowest total of 81/8 with Hasaranga getting 4/9 in 4 overs.

In reply, Sri Lanka reached the target in 14.3 overs with Dhananjaya De Silva (23 ) scoring bulk of the runs. Rahul Chahar finished with 3/15 in 4 overs.

However, after the game, India captain Shikhar Dhawan, in a warm gesture, was seen interacting with the young and inexperienced Lankan side. Victorious Lankan captain Dasun Shanaka was also present during the interaction and this moment was applauded by fans on the internet.

This was Sri Lanka’s first-ever bilateral series win over India, and it was Shikhar Dhawan who had to take that loss. But, this came after the originally second-string outfit was weakened even further due to 9 players being placed in quarantine – 8 were in close contact with Krunal Pandya, who tested positive for the covid-19.

After the hosts registered the series win, they huddled around Shikhar Dhawan, who had played international cricket for a decade now, to learn about his process and experiences.

In the video, the southpaw could be seen teaching the young Lankan cricketers about the aspects they should focus on – such as skill, fitness, and mental preparation – and how to cope with struggling form.

“Dhawan embarking on knowledge and experience to this young SL team sums up the sportsmanship of this series and how this Indian team has gained all our respect,” wrote a Lankan fan on Twitter.

“Hardik Pandya gifting a bat to Chamika and now Shikhar Dhawan taking the time out to talk to the young team. One thing for sure, this Flag of Sri Lanka bunch loves to learn. Onwards and upwards,” observed another.

Australia has won the second T20 against Sri Lanka at the SCG on Sunday in a Super Over thriller after a missed wide call ultimately cruelle .... >>

New dates for the Tokyo Olympics

The postponed Tokyo Olympic will be held from July 23 to August 8 in 2021, the International Olympic Committee (IOC) has confirmed. It .... >>

The men's T20 World Cup due to take place in Australia from October 18 has been postponed until next year due to the coronavirus pandemi .... >>

Yupun Abeykoon the only Sri Lankan athlete to get direct...

Sri Lanka wins Another medal at Tokyo Paralympics as Dulan...