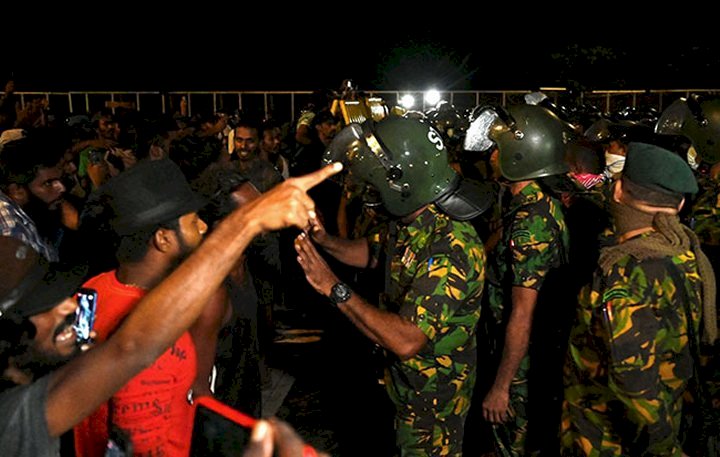 The Security Forces has taken control of the presidential secretariat in the capital early in the morning. The pre-dawn raid was jointly launched by the Army, the Police and the Special Task Force (STF).

Soldiers also destroyed tents at the adjacent GotaGoGama protest site, arrested several protest leaders and cordoned off the area together with about 100 protesters.

As the troops swept into the Galle Face protest site, the protesters were asked to vacate the entrance to the Presidential Secretariat. The security forces warned to arrest the protesters under provisions of emergency laws if they clash with the troops.

However, tensions escalated as the troops removed the protesters from the premises, and nine people were placed under arrest by the police. According to reports, two of them have sustained injuries.

The security forces have now taken over the entrance and area surrounding the Presidential Secretariat.

The military assault came hours after the protesters withdrew from the camp in front of Temple Trees, the prime minister’s official residence. The protesters had already announced their intention to withdraw from the presidential secretariat.

US Ambassador to Colombo Julie Chun on Friday expressed concern over actions taken by Sri Lankan authorities at the protest site in the middle of the night. “Deeply concerned about actions taken against protestors at Galle Face in the middle of the night. We urge restraint by authorities & immediate access to medical attention for those injured," she said in a tweet.

The military raid at the Galle Face protest site came less than 24 hours after Ranil Wickremesinghe was sworn in as the new Head of State.

Legendary singer Lata Mangeshkar, who died early today after weeks of hospitalisation, was cremated with full state honours at Mumbai's .... >>

Fully-vaccinated international arrivals no longer have to isolate for 72 hours in both Victoria and New South Wales.  In .... >>

A coronavirus vaccine on track for the new year is rolling off the production line. US multinational pharmaceutical corporati .... >>

New South Wales record staggering increases in the number of new cases as the States’s Covid crisis continues. There were 681 recor .... >>

New South Wales will only start relaxing lockdown restrictions from Friday, but does not plan to implement all "step one" measures .... >>

So many questions unanswered : Sangakkara on last year's...

Sri Lanka was announced as the host country for the prestigious...