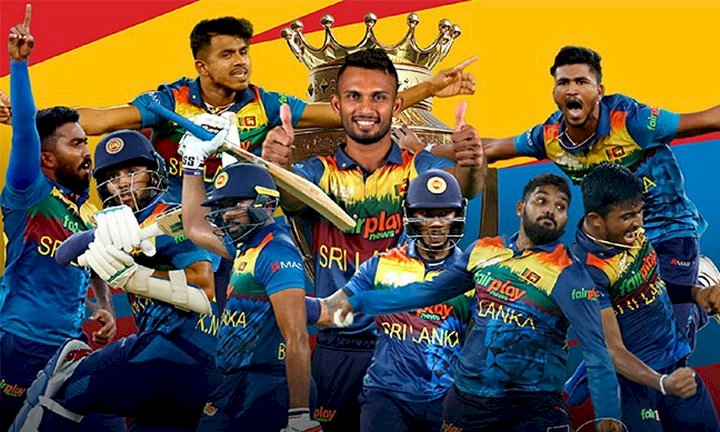 The Sri Lankan cricket team gifted the island nation joy and the sixth Asia Cup title as they defeated Pakistan by 23 runs in the final in Dubai on Sunday, their fifth T20I win on the trot.

Batting first, Sri Lanka rode on Bhanuska Rajapaksa's unbeaten 71 off 45 balls to power the team to 170/6 in 20 overs. In reply, Pakistan were never in the chase losing early wickets, Mohammad Rizwan (55) and Iftikhar Ahmed gave some hope with a 71-run third wicket stand but once the partnership was broken, Sri Lanka were on top again.

Wanindu Hasaranga put tyhe final nail in the coffin with his three-wicket burst in an over that included the prized scalp of Rizwan. In the end, Pakistan were all out for 147 runs in 20 overs.

President Ranil Wickremesinghe has extended his warm congratulations to the Sri Lankan cricket team on winning the Asia Cup title for the sixth time.

“Congratulations to the Sri Lankan cricket team on winning the Asia Cup 2022. Well played Pakistan!” he said in a tweet.

“The second championship for today. Goes to show that, with dedication and determination we can overcome challenges as a nation. Onwards and upwards Sri Lanka!”

Sri Lanka produced a dominant performance to defeat Pakistan by 23 runs in the 2022 Asia Cup final on Sunday as they lifted a sixth continental title in Dubai.

“Our cricket team raised Sri Lanka’s reputation in the international arena by achieving a record-breaking victory in the finals of the Asian Cricket Tournament.

All these achievements were helped by the unity and immense commitment of the leadership and other members of the team.”

The President expressed his heartfelt thanks to all those who dedicated themselves for this great victory, despite the grave challenges Sri Lanka is currently facing, noting that the common commitment made by everyone until victory was assured, is a great example not only for the cricket world but also for the younger generation in other fields.

Her Majesty The Queen Elizabeth II has passed away aged 96

Actor-politician Ranjan Ramanayake, a Member of Parliament for the main Opposition Samagi Jana Balavegaya (SJB) has been sentenced to four-y .... >>

Pushpika De Silva who was stripped off her crown of Mrs. Sri Lanka 2021, by reigning Mrs. World Caroline Jurie, at a beauty pageant held &nb .... >>

Pfizer CEO says we may Require a fourth vaccine...

Pfizer CEO Albert Bourla said that a fourth dose of the drugmaker’s coronavirus vaccine may be needed amid growing concern about .... >>

Police curfew has been imposed with immediate effect in Divulapitiya and Minuwangoda Police Divisions. The curfew will be in effec .... >>

The global risk of the new omicron variant  is “very high,” the World Health Organization (WHO) said on Monday. &ld .... >>

Health Minister Greg Hunt announced today that Australia’s human biosecurity emergency period, which has been in place since 18 March .... >>

China tells students to avoid studying in Australia and...