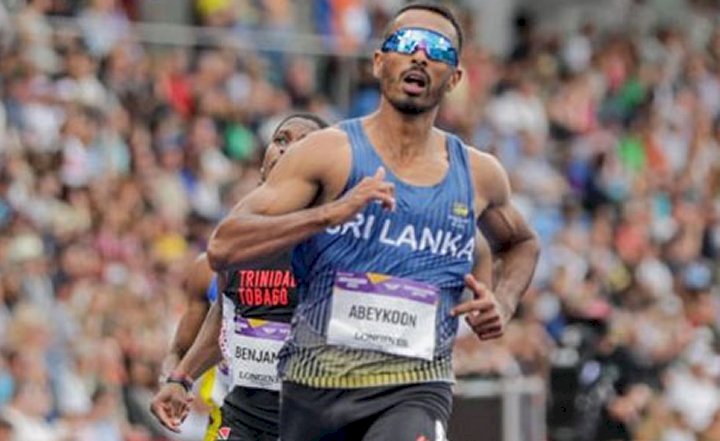 Sri Lanka’s Yupun Abeykoon won the bronze medal in the final of the men’s 100 meters event at the 2022 Commonwealth Games in Birmingham.

Sri Lanka’s Yupun Abeykoon won the bronze medal in the final of the men’s 100 meters event at the 2022 Commonwealth Games in Birmingham.

The gold medal was won by Kenya’s Ferdinand Omanyala who finished the race in 10.02 seconds and the silver medal was won by South Africa’s Akani Simbine. His recorded time was 10.13 seconds.

Previously, in the third preliminary round of the 100m event, which was held at 11.40 pm Sri Lanka time on August 3rd, Yupun finished the race in 10.20 seconds and qualified for the final round by taking the fourth place. The final was held at 2.00 am Sri Lankan time today (04).

Having become the first Sri Lankan in the history of the Commonwealth Games to qualify for the finals of the 100m men’s event, Yupun has also managed to raise the medal tally for Sri Lanka.

In a Facebook post following his medal-winning heroics, Abeykoon said: “Have no words to explain the feeling that I have right now.”

“I did it! I made myself proud and I made everyone who has been there for me proud! Thank you very much to all of you for being there through every moment of this race.”

“This is just the start of more big things to come in the future. I’m going to keep working hard,” he said.

International travel to resume from November

A man who hit and killed a 20-year-old student as she was crossing the road will spend at least eight years in jail. Judge Liz Gaynor senten .... >>

Veteran Sri Lankan  artiste Jackson Anthony has extended his support to the peaceful protest by the public against President Gotabaya R .... >>

The brother of Australian cricketer Usman Khawaja has described himself as a “coward” as he apologised for fabricating a fake te .... >>

Coles hiring another 5000 new Staff to meet the demand...